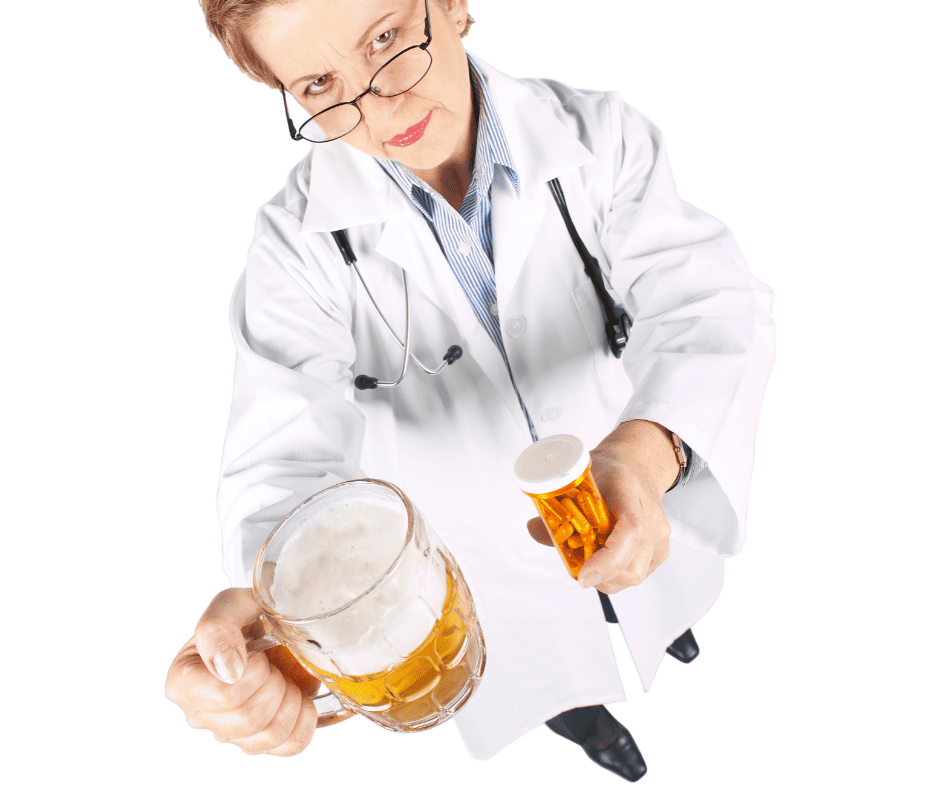 There’s one obvious benefit reaped when we consume non alcoholic beer: we’re avoiding alcohol. Luckily, there are other benefits of drinking alcohol free beer. In this article, I list and source 15 answers to the question—is non-alcoholic beer good for you?

I have been immersing myself in alcohol replacements since my second daughter came along. (Ironically, just when I needed alcohol the most.) And while I’m not an MD, I can attest to experiencing several benefits first hand. The rest I’ll just hope are true.

Sit back, crack a non-alcoholic cold one, and feel your body get stronger.

In fact, studies have shown that athletes who drank non-alcoholic beer had better hydration levels than those who drank only water.

One good thing about NA beer is that it doesn’t have the diuretic effect of regular beer. So it won’t dehydrate you.

Non alcoholic beers are rich in silicon, which has been shown to help increase bone density and collagen production. The hops and barley also have anti-inflammatory properties that can aid in bone health. This may help prevent osteoporosis.

To be fair, some people wonder if you’re getting enough to reap this benefit.

Alcohol initially provides stress relief. Then it increases stress hormones. Non-alcoholic beer, on the other hand, can offer the same relief without the negative stress. Studies have shown that a compound found in hops, called 5-HIAA, has been linked with reduced stress and social anxiety.

And if that’s not enough to convince you, alcohol free beer can also serve as a placebo for relaxation. After all, going through the motions of cracking open a cold one and taking a sip can be just as soothing as actually drinking it.

Hops, the main ingredient in beer, contain compounds such as xanthohumol and myrcenol that have been shown to have a sedative effect. In fact, hops are often used in sleep aid supplements and teas for this very reason.

NA beer has been shown to stimulate GABA, a neurotransmitter that helps regulate sleep patterns. Studies have found that GABA levels are higher in those who drink non-alcoholic beer before bed compared to those who consume alcoholic beer or no alcohol at all.

So enjoying one before bed may give you just enough of a boost to drift off into dreamland.

According to recent studies, non alcoholic beer may help circulation and reduce the risk of cardiovascular disease. This is attributed to phenols—compounds found in barley and hops— which are shown to reduce plaque formation in arteries and protect against atherosclerosis. (Health tip: darks and stouts tend to have higher phenol levels.)

7. Cutting Calories and Carbs (and not getting fat)

Alcohol calories are considered “empty” because they provide no nutritional value. In comparison, non-alcoholic beer minimizes empty calorie intake, a boost for calorie counters and dieters.

A similar benefit happens with carbs. Non-alcoholic beers have a much lower ABV (<.05%), which means a lower carb count overall. This is why swapping out regular beer for its non-alcoholic counterpart can make a significant difference in your carb intake, leading to weight loss and improved fitness.

We already mentioned the benefits of silicon. But a bottle of NA beer can give you a boost of other nutrients. These include vitamin B, calcium, potassium, zinc, iron, selenium, sodium, and folic acid. This slate of micronutrients includes powerful antioxidants that impact everything from immunity to skin health.

Some NA brewers have made it a point to jack up the micronutrient value of their brews. Two Roots, for example, adds Vitamin B12 and electrolytes to their Hazy West Coast IPA. This may be a nod to people who quit drinking due to a health condition, a big market segment for alcohol free beers.

Studies have shown that non alcoholic beer has antioxidant and anti-inflammatory properties thanks to ingredients like malt and silicon.

And if that’s not enough, it may even benefit your brain health thanks to neuro-protecting ingredients like hops and phenols. And who doesn’t want a sharp mind as they age gracefully?

10. Cutting Back on Alcohol

We all know that alcohol can increase cancer risks and other chronic health issues. When we have non alcoholic options, we decrease alcohol intake and cut these risks.

No drunken nights will save you some headaches (literally and figuratively) in the long run. Maybe cancer, too.

11. Keeps You From Getting Drunk (or hurt…or hungover…or in legal trouble)

Traditional beer quickly puts you over the legal driving limit. Non-alcoholic beer, on the other hand, has such low alcohol content that it won’t register on a breathalyzer (unless you’re really small and drink 10 in an hour).

Skipping the drunk also means that you won’t have to worry about losing control. This means no more mouthing off to your boss at happy hour or accidentally texting Mom instead of Max. (Just don’t bring it up—EVER.)

Non alcoholic beer has the same potential for friendship-bonding that regular beer does—minus the memory loss about what’s her name, your new best friend. (Pounding shots might not be the most conducive way to make connections.)

NA beer is an ideal alternative for being social without taking on the risks of alcohol. In addition, it can help expand your networking options by allowing you to connect with others, including other mindful drinkers.

13. It gives you good feels (and prevents bad feels)

Before you roll your eyes at me, hear me out. Non-alcoholic beer triggers dopamine release, leading to feelings of pleasure and relaxation. This is the same feel-good chemical released in the brain by alcohol, sex, and chocolate. As a result, it reduces stress and anxiety.

The best part? Drinking non-alcoholic beer allows you to experience these rewards without the negative mental fallout of alcohol. These include impairments in cognitive function, increased anxiety, and depression.

14. It tastes delicious (no, seriously)

In the past, non-alcoholic beer was viewed as sad and flavorless. Maybe even embarrassing. But they now have every quality found in full-strength beers, from the hoppiness of Cascade hops to the citrus of Chinook hops.

The main reason is innovation in the brewing process, which has new techniques in arrested fermentation. Thanks to this, flat and watery is a thing of the past. Today’s NA beers have just the right level of carbonation and head retention, recreating the mouthfeel of the real thing.

Crucially, respect for NA beers has led to big dollar investment. And money + innovation = more improvements. Just look at companies like Athletic Brewing and Untitled Art, who have set a new standard in the industry for quality.

We obsess over gut flora these days, hence the recent surge in probiotic sales. But NA beer is another natural way to help our gut health. One study showed that alcohol free beer supported “gut microbiota diversity.” (I’ll translate: it’s good for your tum-tum.)

Finally, a beer gut I can be proud of.

On top of all that, there are numerous indirect health benefits from drinking non-alcoholic beer. Alcohol is causally linked with a host of negative health risks. Consider the the following:

All of these risks are cut when we avoid alcohol. Which is why drink non alcoholic beers clearly has indirect benefits not associated with the direct benefits of their ingredients.

So is non-alcoholic beer good for you?

To recap, here are some key benefits of non-alcoholic beer:

A lot needs to be proved about NA beer’s ability to truly cause some of the removed benefits. But overall, the answer to the question of non-alcoholic beer’s health benefits is a resounding YES.